All about IR files

Learn how to use IR files with Neural DSP plug-ins properly.

An impulse response is the measurement of a dynamic system reacting to an input signal. This information can be stored in files, which can later be used to recreate the sound of spaces, reverberations, speakers, etc.

In the context of guitar/bass gear, we usually call the impulse responses that "capture" the sound of a determinate cabinet as IR files. These files capture the specific response of the cabinet, speaker, mic, and mic position.

Most of the time, IR files are found as .wav audio files, which can be used with IR loaders to replace the cab section of your signal chain. The majority of amp sims and amp modeling units also use built-in IRs for the same purpose. Additionally, our plugins include the option to load your own IR files, so you don't need additional software to use them. 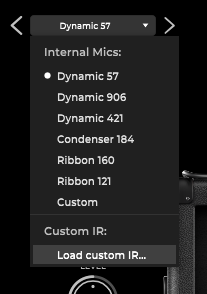 When using IR files, you should be aware of the following specs:

Length: The tonal quality of a cabinet is usually represented accurately enough on the first 20ms of an IR file. The rest of the duration determines how much of the resonance and reverberations are kept on the file, which causes longer IRs to sound more natural. Most IRs come either as 200ms or 500ms.

Sample rate: When choosing an impulse response, you will find that many manufacturers offer them in multiple sample rates. This is because some amp modelers operate at a fixed sample rate. If you want to load them inside a DAW, just pick the one that matches the sample rate of your project.

Cabinet impulse responses are captured using the same microphones utilized when recording audio from regular cabinets. If you're looking for a specific sound, keep in mind that cabinet and speakers aren't the only defining elements, you also need to consider the microphone model and the position of it.

All that information is usually displayed in the name of the IR file.